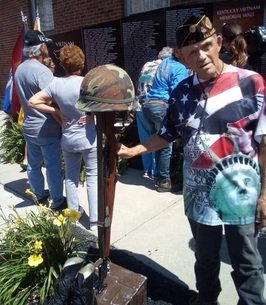 Rodnale Steven Lonaker (76) of Falmouth, KY passed away on Thursday, July 21, 2022, at the St. Elizabeth Hospital in Ft. Thomas. Steve was born in Pendleton County on February 21, 1946, son of the late John Thomas and Bernice Owens Lonaker.

Steve was a United States Army Vietnam Veteran and a member of the American Legion Post 109. He was a member of New Zion Baptist Church and retired from Hilltop Stone in Butler.

Visitation will be held from 4-8pm Thursday July 28, 2022, at Peoples Funeral Home in Falmouth. Funeral Service will be held on Friday July 29, 2022, at 2pm under full Military Honors, also at the funeral home. Steve’s final resting place will be at Riverside Cemetery.